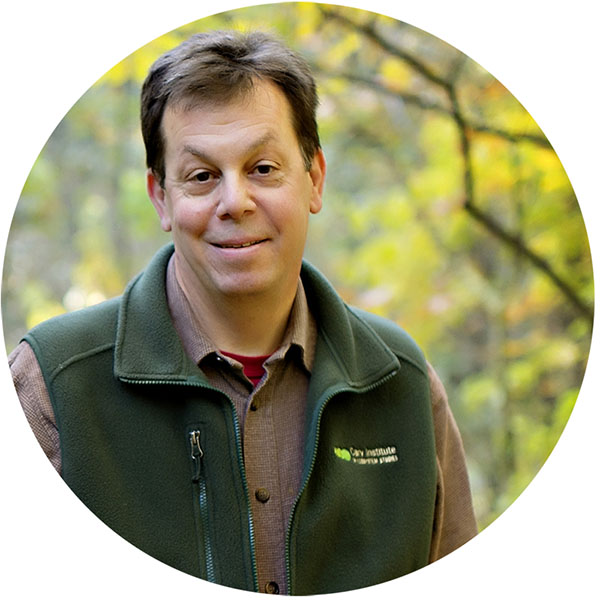 Visitors to the Cary Institute's Millbrook campus will admire our diverse woodlands, but may wonder why there are so many standing and fallen dead trees left scattered, sometimes in prominent places. Some might even say that our forests are messy.

Our response is: "Thank you — we plan to keep them that way!" Our property management strategy includes retaining these trees because dead and dying wood supports many organisms that call our forests home.

Standing dead trees are known as snags; they provide food, shelter and resting places for wildlife. As fungi and insects attack living trees and dead snags, they soften the wood, making it possible for woodpeckers and other cavity makers to create holes. These holes are also used by other animals. At least 85 species of North American birds are known to either create nesting holes, use natural cavities resulting from decay, or use holes created by other species. Honeybees, mice, squirrels, raccoons and even bears take advantage of abandoned cavities. Other animals are attracted to snags to feed on the abundance of spiders, ants, beetles and other insects they house.

Once felled by decay, wind, snowstorms or other forces, tree trunks and large branches play other important ecological roles on the forest floor. "Coarse woody debris" is one term ecologists give to dead wood that is on the ground. Woody debris reduce soil erosion on slopes and provide food for many organisms, including bacteria, fungi, lichens and mosses. Woody debris also retain moisture and trap fallen leaves, which in turn, decompose into rich, organic matter suitable for the germination of other plants. Thus woody debris often become nursery sites for plant establishment. It can also protect new seedlings, as herbivores find it difficult to forage among a tangle of dead branches (imitating nature, foresters know that leaving tree tops in large pieces after logging is one way to keep deer from eating all the seedlings that will be required to establish the next forest).

Studies of Northeast forests have found more than 40 vertebrate species rely on the presence of woody debris. It helps retain small pockets of moist cover critical for the survival of small animals when other parts of the forest floor dry out. Turn over a rotting log and watch the invertebrates scurry away for cover. These small animals in turn attract amphibians, reptiles, birds and mammals that find woody debris a hospitable and well-stocked "grocery store."

Carbon storage in both living and dead wood has important global implications, as it is delayed from being added to escalating atmospheric carbon dioxide levels. Carbon stored in woody debris is slowly moved into the soil or released into the atmosphere as trees decay. Unlimited clearing and burning woody debris from woodlands not only removes valuable food and shelter for wildlife, but also speeds up the release of carbon back into the atmosphere.

The adoption of renewable forest management practices can allow the continued harvest of fiber and fuel while leaving adequate dead snags and woody debris to fulfill their important ecological functions. The result may look messy, but there is a lot happening out there that makes it worth the visual sacrifice.