Cary Trail Specialist Barry Haydasz tells us about his early interest in nature, the origins of recording his observations of the natural world, and advice for budding naturalists. 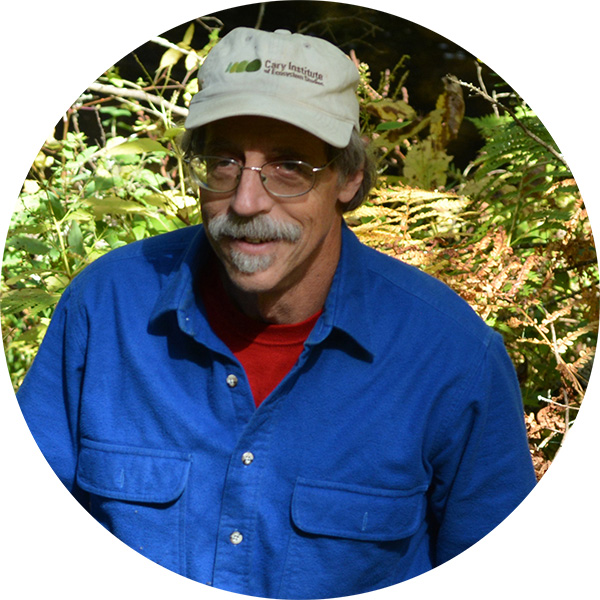 Barry Haydasz has been the Trail Specialist at Cary Institute for over 15 years, having started as a volunteer. His trail reports give an overview of what’s buzzing and blooming on Cary Institute’s grounds from late March through October. Barry was born in Wappingers, and has lived in Stanford, NY for nearly 30 years. Here, Barry tells us about his early interest in nature, what he does at Cary, and advice for budding naturalists.

How did the trail reports get underway?

Around 2003, I started walking the Cary trails as a volunteer trail monitor. As I was returning from the trails one day, I bumped into Judy Sullivan, Fern Glen manager at the time, who asked about what I had encountered there. I told her that I had been keeping a list of plant and wildlife observations and also took photos. She asked to see the notes and photos, so I stuck them on a webpage and sent her the link. That was how it started. Over time, it’s evolved, moving from my own webpage to Cary’s website.

What is the most exciting thing you’ve seen on Cary’s grounds?

Every time you go out, something wows you. Once, I was leading a small group on a butterfly walk. We had just entered an area in the woods that is moist and damp, with speckled sunlight. We were standing there quietly and a Giant Swallowtail came through, circled around us, then left. We all stood there with our mouths open. The Giant Swallowtail wasn’t in this area when I was a kid. It has only shown up in recent years. It is the largest butterfly in North America, so it is an amazing thing to behold.

What does an average day look like for you when you’re hitting the trails?

I generally start walking around noon or 1pm, alternating my route a little each week to keep it interesting and my eyes fresh. I’ve been doing trail reports for a long time, so I know what lives where, and how things usually look as the seasons change. There are certain butterflies that you can only find in specific habitats. That means that there might only be two or three places you’ll see a certain butterfly on the whole trail system.

What is your favorite thing about Cary?

Being around a group of such talented and incredible minds who have accomplished so much. I used to just be the weird kid in the neighborhood that chases butterflies. Now I seem to be considered a naturalist. That’s something that I never experienced before, that kind of respect for my interests.

What do you work on at Cary, besides trail reports?

I keep the Fern Glen in shape for visitors, and I keep the trails cleared and ready for hikers.  I have plant labels that I put out in the Fern Glen as plants are blooming. When people come through and ask questions, I answer things as best I can.

What sparked your interest in nature?

I’ve been interested in nature since I could crawl and met my first caterpillar. I always liked insects; they are my favorite. Squirrels and birds run away from a kid, but you can hold an insect on your hand and it will walk right along, unbothered. These up-close looks present opportunities to observe insects in a way that other critters don’t allow. Plus, insects come in such incredible forms, shapes, sizes, and colors.

Later in life, school and work distracted me from my love of nature. Then a friend convinced me to go to Costa Rica with him. I relived my childhood in two weeks with the different animals. I was reborn there. I realized it wasn’t ‘enough’ to just appreciate a forest; I wanted to play an active role in conservation.

After my experience in Costa Rica, I went on a business trip to Boca Raton, Florida. In the rental car was a book of coupons including one for ‘Butterfly World’, which I decided to check out. All the butterflies I had seen in Costa Rica were there. There was a pamphlet for the Xerces Society, a group dedicated to the conservation of invertebrates. My involvement in conservation grew from there.

I’m really happy to share my story and my passion. I know I’ve been able to help some people who are interested in nature. I ran into someone who was in one of my programs and they said it was inspiring. They decided to keep a bunch of natural debris they were going to destroy, and instead left it for animal habitat. I felt like I helped someone change their view on the natural world. It made the world a better place.

What advice would you give to someone who is interested in what you do?

Do it! A high school student will ask about my job, and I tell them that volunteering is a good way to get into the field. Organizations involved in natural history are often looking for volunteers. If you want to get your hands dirty and do fieldwork, those sorts of places are your best bet. I think volunteering is a great thing because it gives you an early taste of something you think you might like, and can help you decide whether it’s something you want to pursue.

What do you do when you’re not at Cary?

I like motorcycling and I play classical guitar. I picked up the mandolin recently and have been doing bluegrass and Irish music. Those are the biggies. Our classical guitar bunch has been meeting on Zoom. The sound quality isn’t great, but it is nice to get together and hear some new pieces.

Pandemics: Humans are the culprits