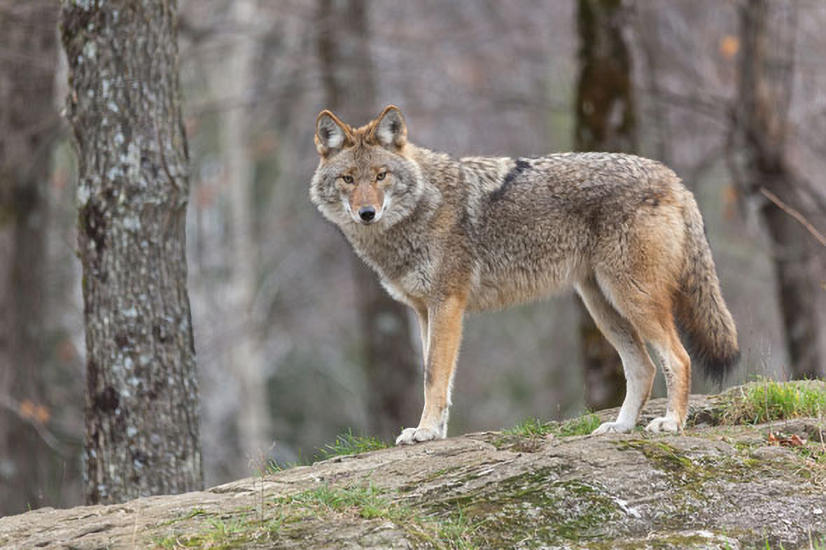 In New York State, if you hear howling at night, it’s not a wolf. And it’s not your imagination. When New York’s wolves were killed off in the 19th century, it left an ecological vacuum that coyotes were happy to fill.

Coyotes arrived in New York in the 1920s from western and northern regions. Today’s coyotes have some wolf genes mixed in with their ancestral coyote DNA, but there is no evidence of recent hybridization with domestic dogs.

As one of the region’s top predators, coyotes perform some of the ecosystem functions once provided by wolves. Researchers are exploring the extent that coyotes regulate large animals, such as deer, and their impact on prey species.

This winter, coyotes were more than an occasional visitor at the Cary Institute’s Hudson Valley campus. Coyote tracks far outnumbered those of bear, fox, bobcat, fisher, otter, and raccoon. Cameras placed on the grounds as part of a deer study recorded 4 times more coyotes than all other predators combined.

Studies suggest that coyotes and foxes don’t “play well together.” When coyotes move in, foxes move out or get killed. Cary Institute researchers hypothesize the loss of foxes may increase Lyme disease risk. Coyotes eat a wide range of animals, from mice up to deer, whereas foxes focus their appetites on small rodents, like mice and chipmunks, which are reservoirs for Lyme disease.

Fewer foxes could mean more mice, thus more ticks that feed on the mice and transmit Lyme disease to people. The relationship among coyotes, foxes, and Lyme disease risk continues to be debated and studied by scientists.