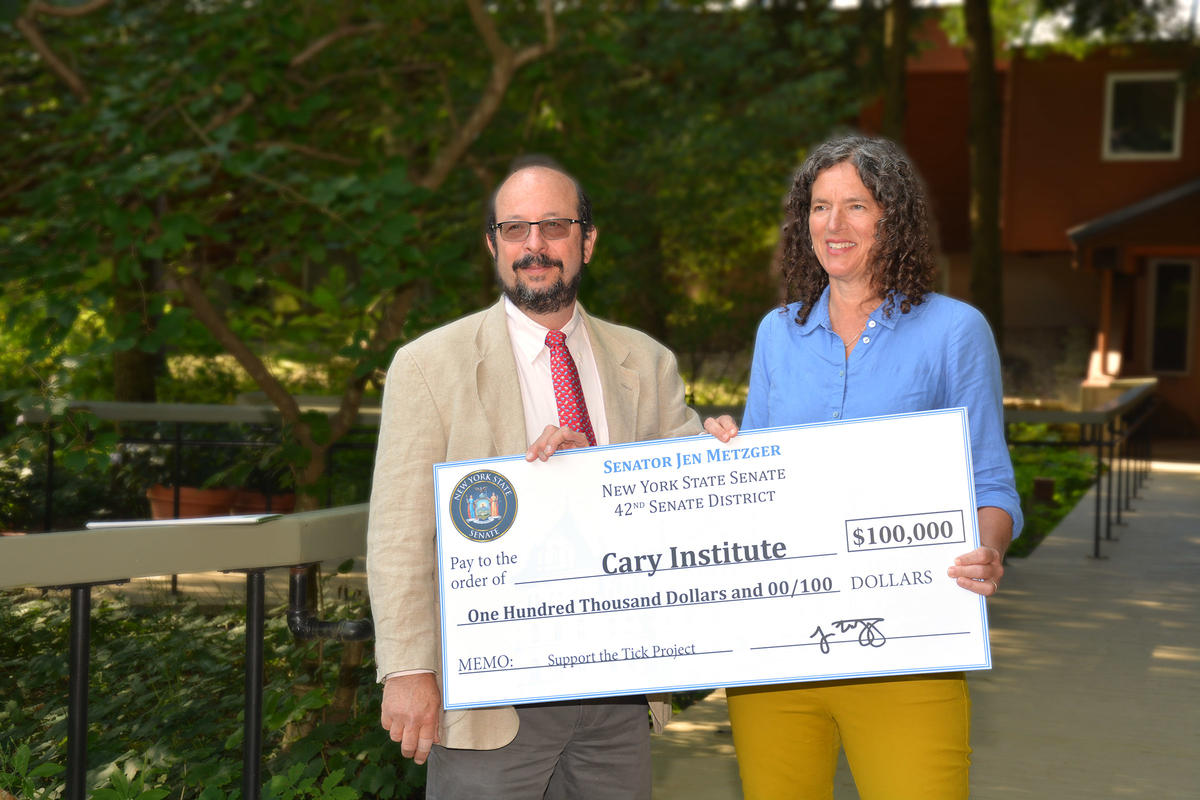 A New York state Senator was in Millbrook today to present a check to the Cary Institute of Ecosystem Studies in support of a project aimed at Lyme disease prevention.

The $100,000 check is for the Cary Institute’s ongoing Tick Project. In June, the state Senate approved a resolution in the session’s final hours that included $250,000 for research into Lyme and tick-borne diseases, far less than the $1 million secured in the previous legislative session. Democratic New York state Senator Jen Metzger was among lawmakers who fought for at least some funding restoration.

“This is really a public health crisis, and we really need to be treating it as such, and the state   really needs to treat it as such,” Metzger says.

She says it was a tough budget year with an active chopping block and more than one public health crisis.

“We have the opioid crisis, and that is another incredible public health crisis that is affecting many communities statewide,” says Metzger. “And we’ve got a lot of, we’ve got some major public health issues that we have to address and that are competing for funds and attention.”

Dr. Joshua Ginsberg is president of the Cary Institute. He says putting money toward The Tick Project could save a lot of money down the road, if the project yields successful prevention options.

“We have an $8.8 million project called The Tick Project, which should be called the how do you kill ticks project. It is aimed at trying to figure out, at the scale of a whole neighborhood, about 100 households, whether we can kill enough ticks to reduce the incidence of Lyme disease,” Ginsberg says. “And so it’s a complicated project. It’s in 24 communities in Dutchess County, 2,400 households, five years, two different treatments to kill ticks, and we are in our third field season.”

Even with less funding, Ginsberg says the Tick Project will be carried out to completion.

“It’s not that we can’t do the work, it’s that something else will suffer because this is among the most important things we are doing both for the science, because the science of what we are doing is novel and no one has ever done it because it’s $8.8 million, and raising money to do this kind of study is hard,” says Ginsberg. “The CDC did a study that was similar but it was on individual households, about 1,200 individual households in three states, and what is showed is treating a garden once or twice in isolation kills a lot of ticks, it might kill 40 or 50 percent of the ticks, but it does nothing to reduce the incidence of Lyme and tick-borne disease.”

Metzger says Lyme and related diseases are a problem beyond Hudson Valley borders.

“Well, it is a statewide problem. I will just tell you, as the chair of the Agriculture Committee in the Senate, I meet with a lot of farmers and farm organizations, and this is, and farmers that are north and west, outside of the Hudson Valley, and this is one of their top concerns is Lyme disease and addressing this,” Metzger says. “They are particularly, farmers and their employees are, that’s probably one of the most at-risk populations for Lyme and tick-borne illnesses.”

“Yes, next budget year I’m going to fight like hell to restore, at least restore the level of funding we had the previous year, which was pretty extraordinary,” says Metzger.

Ginsberg says there is a lot of money being spent on ineffective prevention, such as a popular method that was considered in a nearby northwestern Connecticut community.

“They were about to spend $80,000 spraying around, spraying pyrethrum, pyrethrites around the lake. And I said to them, well, that will kill a bunch of ticks, it’ll kill a bunch of fish and insects because it’s going to go into the water, it’s really not a good idea, I said, and you will have no impact on Lyme disease, at least that’s what our research, CDC research and everybody else’s research says,” Ginsberg says. “So think about the number of communities and the number of households that are getting these flyers that say, let’s spray for ticks, let’s kill your ticks. It will kill 30, 40, 50 percent of the ticks and it will not have an impact on Lyme because we know a) people get Lyme disease not just in their garden, and b) there’s a threshold, we think, at which if you don’t get down below 80 or 90 percent of a population you don’t effect the transmission of the disease and therefore you don’t effect the frequency.”

Ginsberg says federal funding has not matched the scale of the problem.

“So the federal government, interestingly, is not spending very much money on this problem even though it is the fastest growing zoonotic disease in the country with over, close to 400,000 cases. We used to say 300,000, and we know it’s growing,” Ginsberg says. “And I think that New York state taking a leadership position here will be hugely helpful in convincing the federal government,” Ginsberg says. “It’s also an issue that is completely bipartisan.”

The Cary Institute is in Republican state Senator Sue Serino’s 41st District. Serino says that when funding for Lyme and tick-borne diseases was cut from the final state budget, she also continued advocating for the state to invest in this area. She says the Hudson Valley continues to be one of the regions hardest hit by Lyme and tick-borne diseases, and the Cary Institute is leading the way on research that could make a tangible difference in the lives of countless New Yorkers.

In addition to The Tick Project, the remaining $150,000 is carved up among three recipients — $50,000 for Cornell Cooperative Extension’s “Don’t Get Ticked NY” program. Another $50,000 is for Columbia Medical Center’s Lyme and TBD (Tick-Borne Disease) Research Center; and $50,000 goes to Stony Brook University. Again, Metzger.

“I’m basically the poster child for Lyme in the state Senate since I’ve had it five times, been diagnosed with it on five, five different times myself,” Metzger says. “And just living in the Hudson Valley, it is a sad, sad fact of life but I have so many family members, friends that have had Lyme and other tick-borne illnesses, horrible tick-borne illnesses, babesiosis.”

In late July, a Gardiner, Ulster County resident died from the Powassan virus. Gardiner is in Metzger’s 42nd District.