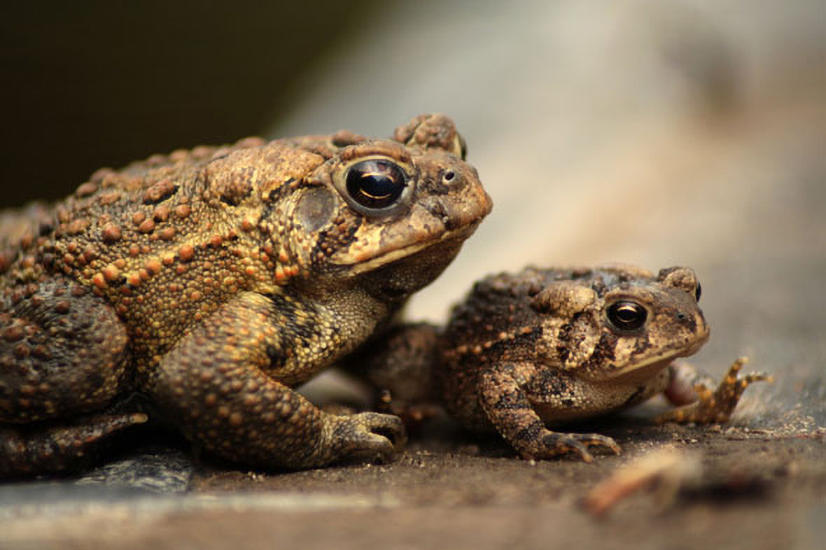 This spring, amphibians displayed their singing skills in the flooded lowlands at the Cary Institute of Ecosystem Studies’ Millbrook, NY campus. Eastern American toads were major contributors to the evening chorus, which was at times deafening.

Toads rarely receive praise for their vocal talents, with more attention focused on their tiny cousins, spring peepers. A warty appearance and a reputation for being poisonous don’t help their popularity. Toad’s skin glands release bufotoxin. While this chemical is unlikely to irritate our skin, it’s a deterrent to anything that tries to eat them.

When toads are confronted by a threat, their defense strategy is to remain still or dig in –poor choices when confronting a moving vehicle. Still, American toad populations are holding strong despite road casualties. They are found across much of the Eastern U.S., covering about the same range as before European settlers arrived.

This may be due to their ability to adapt. Toads are early re-colonizers of areas that have been clear-cut or burned. They also survive well in fields, lawns, and gardens, where they feed on insects – many of which are pests.

During the last 30 years, scientists have documented drastic declines in other amphibian species. A fungal disease called Batrachochytrium dendrobatidis, or “Bd,” is believed to be the primary cause. Bd fungus has been reported on a number of amphibians in the Eastern U.S., including American toads.

Much remains to be learned about this devastating disease. The resilience of toads may provide important clues as to why amphibian species vary in their susceptibility to Bd. Stay tuned for more answers.

–This segment was adapted from an essay by Mike Fargione, who is a wildlife biologist and manager of Field Research and Outdoor Programs at the Cary Institute of Ecosystem Studies.

Produced in collaboration with WAMC Northeast Public Radio, this podcast originally aired on May 29, 2015. To access a full archive of Earth Wise podcasts, visit: www.earthwiseradio.org.