A student contribution to the REU blog.

Most of the world’s population lives in cities. As urban populations grow and climate change impacts become more severe, we need to rethink how cities look and function, with sustainability goals in mind. Two urban issues that are worsening with climate change are extreme heat and flooding. Insufficient access to green spaces is another issue facing many urban residents.

Cities generate lots of heat, and they prevent water from absorbing into the landscape. These problems don’t have an easy fix. We can’t just build a new city over the old one. However, scientists and city planners are exploring solutions. A tool that holds promise is a simple one: planting trees.

Depending on where you live, chances are your city gets hot during summer, or perhaps it stays hot year-round. Urban structures are often built with cement, steel, brick, pavement, and other hard, often dark, surfaces. These materials are sturdy, but they also absorb and hold heat. Solar radiation and human activities, like driving and using electricity, add heat to urban spaces. This makes cities hotter than surrounding areas.

For city residents, exposure to extreme heat can lead to dehydration, heat strokes, heat exhaustion, and death. Heat risk disproportionately affects the elderly, people of color, and low-income communities. Not everyone who lives in a city has access to an AC or even a home to escape dangerous temperatures. It’s important to find a cooling system for cities that benefits everyone. 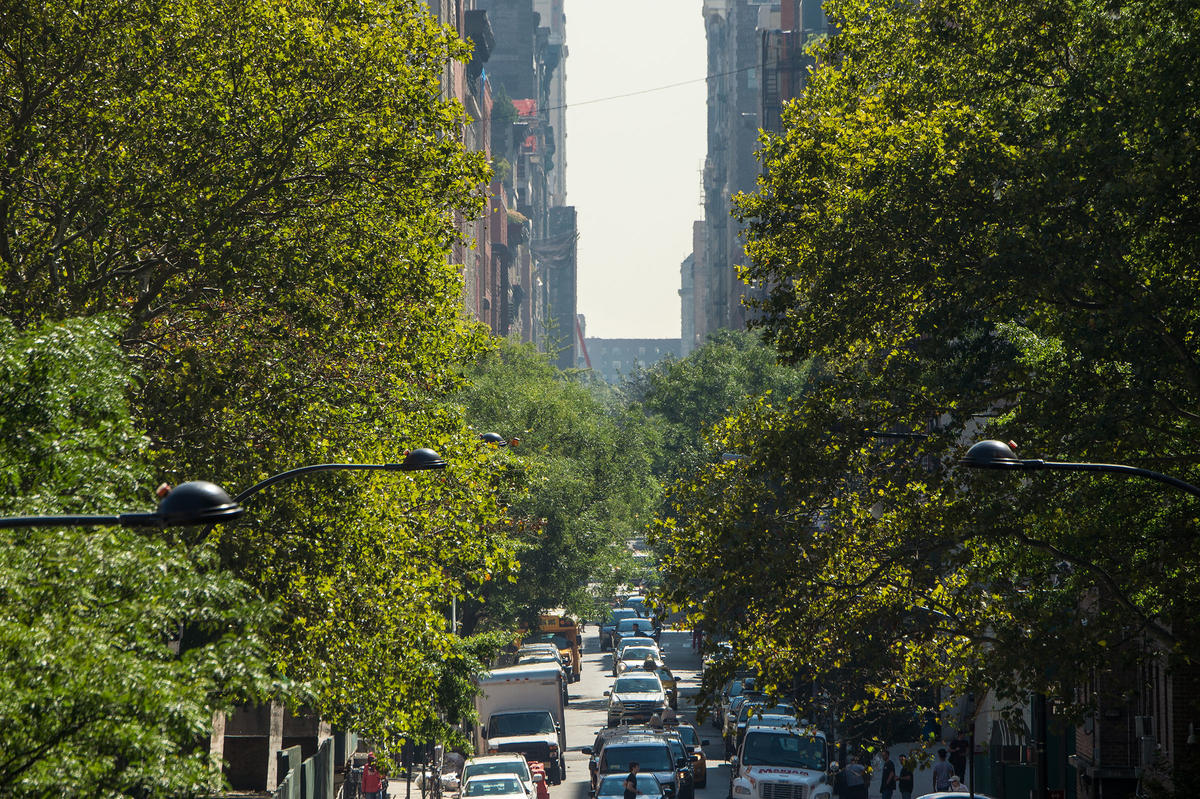 Around the world, rainfall patterns are shifting due to climate change, causing droughts in some areas and flooding in others. Cities, especially coastal cities, are susceptible to flooding – with consequences for infrastructure and lives. When it rains, hard impervious surfaces like streets and sidewalks act as conduits for storm water, allowing it to flow quickly into sewer systems that can overflow. In other areas, impervious surfaces can allow water to pool, which leads to flooding. When there’s nowhere for water to drain, it can take weeks for floodwaters to dissipate. Standing water is a risk to public health.

This is another case where trees can help. Trees slow water moving into sewers and rivers, absorbing some with their roots while surrounding soil absorbs some too. Tree species that can tolerate waterlogging can be especially valuable in cities that experience flooding.

We need to build cities with residents’ and ecosystem needs in mind. With proper planning, trees can be a cost-effective and sustainable solution to problems created by built infrastructure. Using trees, we can manage city problems while improving the health and happiness of urban residents – with benefits for the environment.

I spent the summer of 2020 studying trees in New York City planted as part of the Million Trees Project. The Million Trees Project had the goal of planting one million trees within the five boroughs of NYC. Part of this effort involved establishing ‘afforestation plots’ used for ongoing research. My research looked at how tree characteristics – specifically tolerance to heat and waterlogging – impact tree growth and survival.

Because of COVID-19, I could not collect data in person. Instead, I analyzed data from the ‘Million Trees ’ afforestation sites collected in 2018. Data included information on tree survivorship, growth rate, planting location, and species. All the trees in this dataset were located within four NYC boroughs including: Queens, Brooklyn, Staten Island, and the Bronx. There were two kinds of afforestation plots observed in this study: hydric (very wet) sites and mesic (moderately wet) sites.

I found that trees tolerant to waterlogging had a marginally better growth rate than species with a low waterlogging tolerance. The American sycamore proved to be an outlier, significantly outperforming all other species in terms of growth. Sycamores have a moderate tolerance for waterlogging and heat, and they are known to be fast-growing. Our sycamores benefited from being planted in wet sites – where they typically feel at home. There was little evidence to suggest that heat tolerance influenced tree growth in the plots in this study.

These findings are preliminary and lead to further questions about how other factors, like drought, windstorms, and human activities, impact tree performance in NYC. This kind of information can help ensure that urban greening projects are successful into the future – with optimal benefits for urban ecosystems.