‘Starry sky beetle’ is the common name for the Asian longhorned beetle (Anaplophora glabripennis) in its home region – and what a good name it is. Deep black, dotted with white spots that look like stars in the night sky, this large (¾-1½ inches) beetle with long ‘horns’ (actually antennae) may be handsome for an invertebrate, but it poses a big threat to forests of North America.

Where does it come from? How did it get here?

Native to China and Korea, the Asian longhorned beetle has been repeatedly introduced into North America through international trade. Like most beetles of this family (Cerambycids), it lays its eggs in the wood of trees, where its larvae develop and later emerge as adults. If infested trees are used to make wood products, and those products are shipped internationally, embedded beetles can find themselves unwitting hitchhikers. Particularly worrisome are wood packaging materials such as pallets and crates because they are so ubiquitous in international shipping and they are more likely than other wood products to be made of insect-infested wood.

The map below shows locations of Asian longhorned beetle outbreaks in the US since it was first detected in Brooklyn, NY in 1996. Fortunately, the Asian longhorned beetle is a slow disperser, so eradication is possible if outbreaks are detected early. Successful eradications have occurred in Brooklyn, Chicago, Boston, Toronto, and other locations (see map), and attempted eradications are still ongoing for outbreaks in Worcester, MA, near Cincinnati, OH, on Long Island, NY, and near Charleston, SC.

The primary eradication strategy is removing all ‘host’ trees that the beetle can potentially feed on in the area. Due to the number of possible host trees (see below), this often involves removal of many trees, which can severely degrade natural and urban forests. In Worcester, eradication efforts for the Asian longhorned beetle outbreak detected in 2008 have required removing over 36,000 trees so far.

Asian longhorned beetle host trees include: maple, willow, poplar, elm, ash, and birch, among others. These tree species are very important components of both natural and urban forests. In North America, maples are most commonly infested.

Maples are dominant in forests of the northeastern US and eastern Canada, where sugar maple is an iconic tree renowned for producing maple syrup and displaying glorious red and orange colors in the fall. In the US, maples are the most common street tree in cities and the third most common tree in native forests (after pines and oaks).

So far, Asian longhorned beetle eradication efforts have not allowed the insect to infest forests at large, but if a current or future outbreak escapes containment, it could have serious consequences for forests and cities. The US Department of Agriculture says: “It threatens recreation and forest resources valued at billions of dollars. The Asian longhorned beetle has the potential to cause more damage than Dutch elm disease, chestnut blight, and gypsy moths combined, destroying millions of acres of America's treasured hardwoods, including national forests and backyard trees.” 1 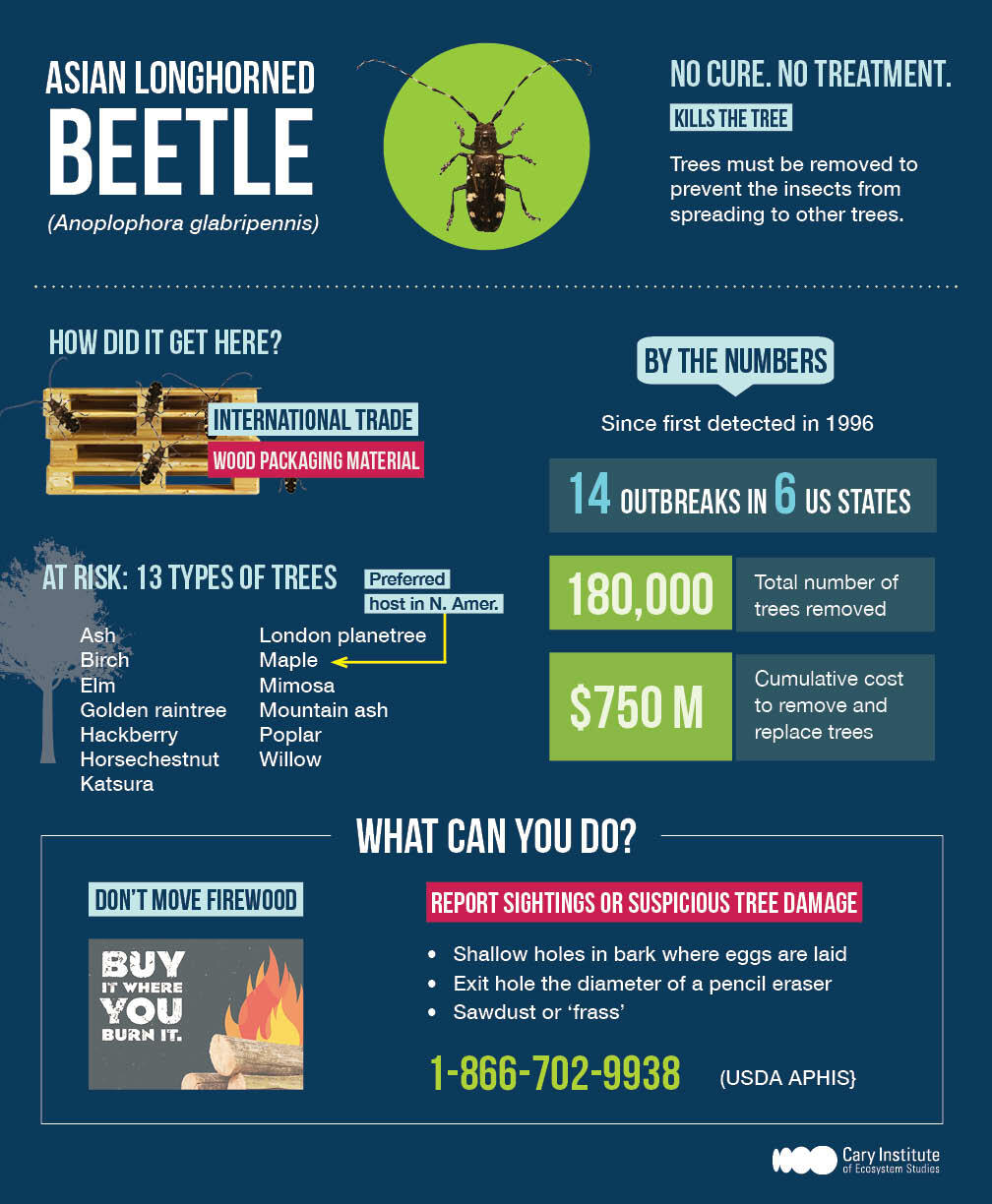 What does an Asian longhorned beetle infestation look like?

The most visible symptoms of Asian longhorned beetle infestation are the large insects themselves and the round, pencil-sized exit holes created by the adults emerging from the tree (see photo). The adults are active during the summer and early autumn. Once a tree is infested, there is no cure or treatment; the tree must be removed to prevent the insects from spreading.

What can you do?

Once established in a new place, Asian longhorned beetle can be transported domestically via firewood. The most important action you can take to prevent its spread is to avoid moving firewood from place to place. Buy firewood where you burn it. If you see an insect that you think is an Asian longhorned beetle, report it online or by phone: 1-866-702-9938.

If possible, take a picture of the insect and tree damage to include with your report. If you are in an Asian longhorned beetle-infested area, obey quarantine rules on wood movement. If requested, allow authorities access to your property to look for the beetles.

Through Congressional briefings and interactions with state and federal agency staff, Lovett is promoting Tree-SMART Trade – a series of federal policy actions that would reduce the introduction of new forest pests.

A novel approach for keeping pests out of wood packaging material