Range maps used by the International Union for Conservation of Nature (IUCN) fall short of protecting birds endemic to the Western Ghats, a mountainous biodiversity hotspot in southern India. When current range maps used by the IUCN were assessed using modeling techniques that incorporate data on species sightings, land cover, and climate – 17 out of 18 were inaccurate and overestimated. So reports a new study, published today in the journal Biological Conservation.

Lead author Vijay Ramesh, a spatial and computational ecologist at the Cary Institute of Ecosystem Studies explains, “Our findings highlight the critical importance of adopting methods that take into account all available data - including citizen scientist observations and advances in satellite imagery. To ensure species survival, we need to refine our understanding of where species actually live, and prioritize conservation areas accordingly.”

The IUCN is the global authority for determining species vulnerability in the face of threats such as habitat loss and climate change. The IUCN's Red List plays a prominent role in guiding the conservation activities of governments, NGOs, and research institutions. Geographic range is a key indicator used by the IUCN to determine conservation status. BirdLife International (BLI), the leading organization for worldwide bird conservation, provides range maps for birds. These maps – based on recent expert sightings and historical records – are the basis for issuing IUCN threat levels. Species found in larger areas are deemed less threatened than species found in smaller areas.

Ramesh notes, “Current methods don’t take into account environmental factors such as climate and land cover, which can vary tremendously throughout a geographic range. They also fail to tap into the wealth of citizen science data on where birds are actually seen. As a result, unsuitable habitat is often included in the species’ range, inflating the apparent extent of where it can be found.”

Coauthor Trisha Gopalakrishna, who was at Duke University at the time of the study, says “This rigorous quantitative approach results in more accurate distribution models than those hand-drawn by experts, which is currently the case for many endemic bird species in India.”

eBird, the popular online birding checklist started by the Cornell Lab of Ornithology, was at the heart of the study. Coauthor Sahas Barve, at Cornell University at the time of the study, explains, “Deep in the forests of the Western Ghats, a million citizen scientists have been using eBird on their phones, laptops, and tablets to document their bird encounters. This dataset, edited by eBird regional reviewers who verify the accuracy of observations for each state in India, provided invaluable information about where birds actually live.”

When the 18 maps the team created were compared to the maps being used by the IUCN, the study’s authors found that 17 IUCN maps substantially overestimated suitable habitat. In some cases, the IUCN maps included townships and other developed areas that could not realistically support forest and plantation dwelling birds. The range of the Nilgiri pipit, which is currently listed as ‘vulnerable’ by the IUCN, was overestimated by a staggering 88%.

Among their findings: more than half of the species were not found in over 60% of the areas mapped by BLI, and 10 of the species had ranges that were so overestimated that the authors recommend ‘uplisting’ their vulnerability status on the IUCN’s Red List of Threatened Species to ensure that they have appropriate protections. This includes moving the Nilgiri pipit and Kerala laughingthrush from ‘vulnerable’ to ‘endangered,’ and moving the Nilgiri flycatcher and black-and-orange flycatcher from ‘near threatened’ to ‘vulnerable.’

“There are many development projects underway in the Western Ghats and many scientists are focusing on how species are going to adapt to these changes. Rather than adaptation, we’re interested in prevention,” Ramesh explains. “By demonstrating that species in this region are already far more threatened than currently stated by the IUCN, our models could strengthen the case of those who are petitioning against development in sensitive habitats.” 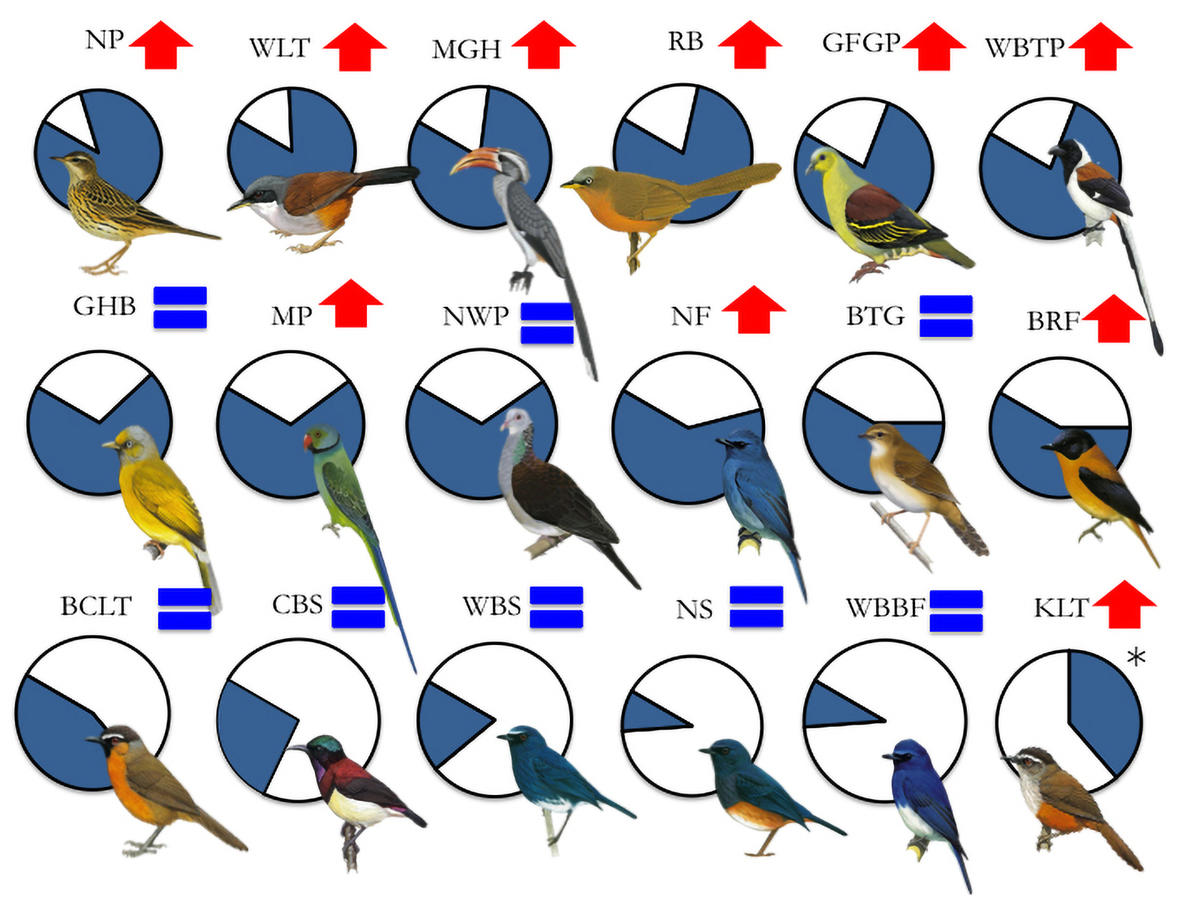 Gopalakrishna explains that this new approach to range modelling could have broad-reaching implications for multiple stakeholders. “With accurate ranges, scientists will be able to better study the effects of human disturbance and climate change on bird habitat. Conservation planners can have greater confidence in the areas that they are managing. In the policy arena, our findings could inform future delineation of parks, high-value conservation areas, and community forests,” she says.

Ramesh concludes, “While the environmental impacts of extensive deforestation, compounded by the intensifying effects of climate change, paint a bleak picture for the endemic birds of the Western Ghats, appropriate management – if implemented swiftly – could save these magnificent and biologically unique species.”

The Cary Institute of Ecosystem Studies is one of the world's leading independent environmental research organizations. Areas of expertise include disease ecology, forest and freshwater health, climate change, urban ecology, and invasive species. Since 1983, Cary Institute scientists have produced the unbiased research needed to inform effective management and policy decisions.

Never send to know for whom the bell tolls; it tolls for thee