The hidden inequality of mosquito bites

Abandoned buildings contain lots of nooks and crannies for water to accumulate and for mosquitoes to lay their eggs.

Living in a low-income neighborhood means dealing with all manner of injustices that richer people don't have to deal with — from low life expectancy to worse air quality to earsplitting noise to slower Internet speeds.

Now, a team of public health researchers studying neighborhoods in Baltimore has added one more indignity to that list: poorer neighborhoods also have to deal with more serious mosquito infestations.

For three years, they surveyed a number of factors known to influence mosquito populations: abandoned buildings, accumulating trash, sources of standing water and surface vegetation among them. They tallied mosquito larvae and pupae where they found them, and put up periodic traps to catch and count adult female mosquitoes (the ones that do the biting).

Data collection complete, they crunched the numbers to see how the different factors influenced each other, and what effect it all had on mosquito populations.

This was the first signal that mosquito populations would be greater in the poor areas. Abandoned buildings contain lots of nooks and crannies for water to accumulate and for mosquitoes to lay their eggs.

Similarly, there was more accumulated trash in poor neighborhoods than in rich ones. Discarded garbage tends to collect water, again making for an ideal environment for mosquito egg-laying.

In each neighborhood, the researchers surveyed available sources of standing water, from discarded cups to empty garbage cans to backyard fountains. Here's what they found when they counted the mosquito larva and pupa populations therein:

In these charts, each dot represents a count done in a given neighborhood block at some point over the course of the three-year study. Counts are displayed as a "standardized container index," which corrects for differences in the number of water-collecting containers in the different neighborhoods. In layman's terms, bigger numbers equal more mosquitoes. 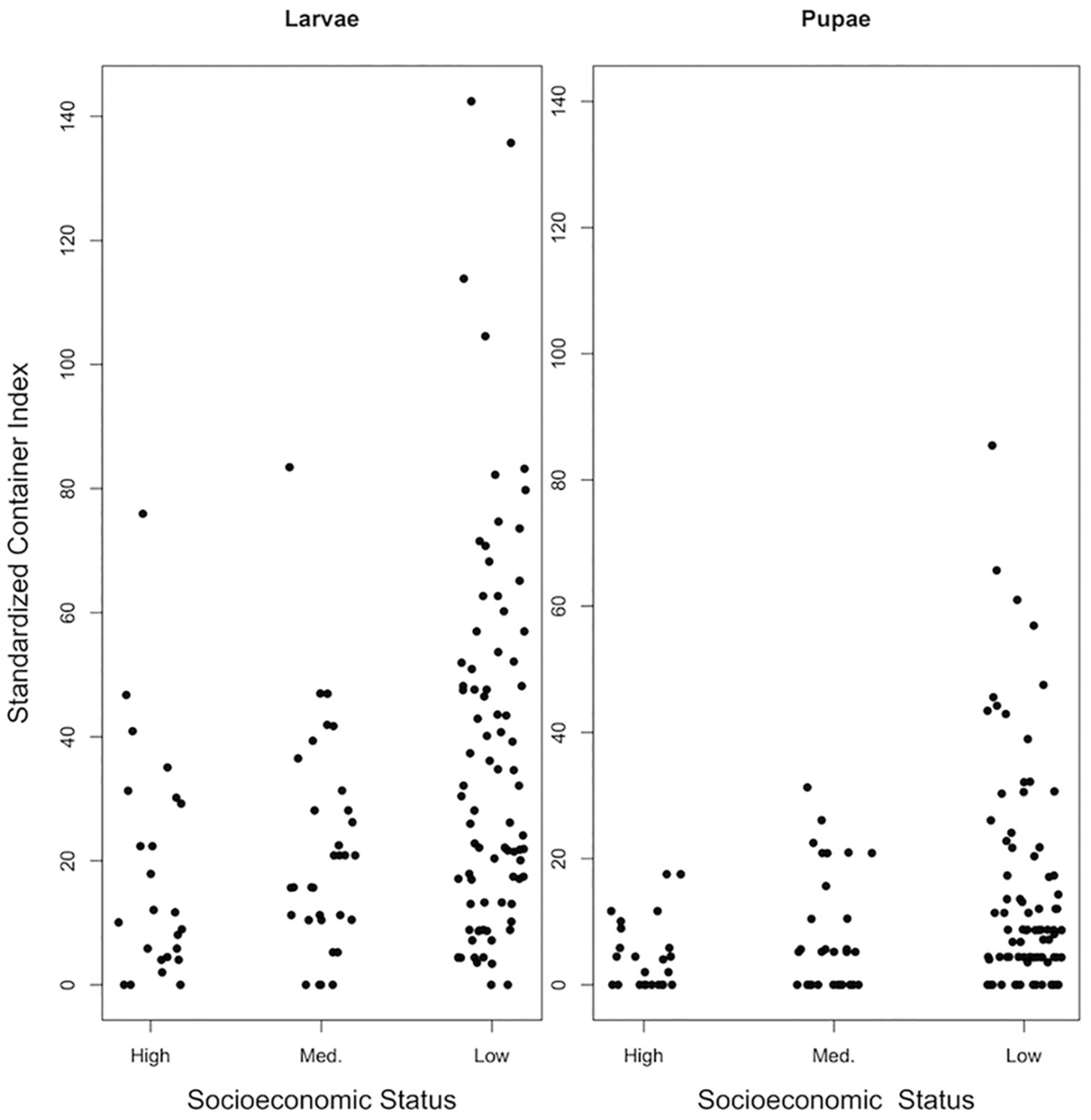 As the charts show, low-income areas tend to be home to more mosquito larvae and pupae. This means more bloodsucking pests when those larvae and pupae mature into adults.

"Areas of endemic poverty and urban decay embedded within northeastern U.S. cities may provide footholds for pestiferous Ae. albopictus populations," as the study's authors conclude. They warn that climate change, which will lead to hotter, wetter cities in the coming decades, will only amplify the problem.

To the extent that there's good news for low-income areas in the report, it's this: the same strategies to reduce general urban blight in these areas — trash pickup, cleaning up vacant buildings and lots — are likely to reduce mosquito populations as well.

And rich or poor, some advice from one of the study's co-authors: "This summer, if you want to reduce mosquito numbers, one the best things you can do is reduce water-holding containers in your community," said Shannon LaDeau of the Cary Institute of Ecosystem Studies in a statement. "After a rainfall, do a quick survey of your yard or neighborhood and address sites where water pools. Planters, clogged gutters, neglected pet dishes and bird baths, and trash all provide great tiger mosquito breeding grounds."

Preparing for when lightning strikes the same place twice, then strikes again